Marcus Lee 李俊纬 is is a Singaporean bilingual artiste; a singer-songwriter well versed in music performance, acting and modelling. The triple threat performer is the face of Pureté Water and Beyerdynamic and promises regional commercial appeal.

Marcus started performing in his teenage years, coming in 2nd-runner’s up in Mediacorp Channel U’s “Campus Superstar”. Later, as the frontman of local indie pop-rock band Exdee, he went on to perform at Esplanade’s Baybeats Music Festival and was subsequently invited to perform the theme song on the opening ceremony of the inaugural Youth Olympics Games (YOG).

Marcus is not shy to big stages, having won the Singapore Selections of Sing! China in 2017, and graced the stage of popular Chinese singing competition,“Sound Of My Dream 2” (by Zhejiang TV), capturing the heart of the judges and Chinese audiences with a heart-breaking rendition of Evan Yo’s “I Can”. He has also been invited to perform at events such as the New Paper New Face Finals, WTA Finals Gala Night, and was featured on Mediacorp Channel 8’s “Hello Singapore” alongside Ding Yi Music Company.

As a budding actor, he has landed roles in local TV, such as Mediacorp Channel 5’s “20 Days” and was cast in Channel 5’s new long-form drama, “Kin”.

Marcus is currently writing and recording, preparing to release his own original material later this year.

1. Share with us the activities you took part in while studying Real Estate – Finance in NUS.

I was staying at University Town’s College of Alice and Peter Tan (CAPT) for 5 semesters, so most of the school activities that I was involved in was in my Residential College (RC). I took part in RC events and games and was mostly involved with performances.

In my third year, I went to Stockholm, Sweden for my Student Exchange Programme (SEP). Apart from being able to experience life and education in a different culture, I learnt a lot of things about myself; I discovered my love for cooking and also reignited my passion for music as I spent my free time busking on the streets.

2. What is your greatest takeaway from NUS?

My greatest takeaway would be the friends that I’ve made and the networks that I’ve built. I treasure relationships a lot and I think university is a time where one is given the opportunity to cross over from education and into the workforce.

Looking back, I feel that my time in NUS helped to develop my soft skills; such as learning how to be resourceful, interview skills, people management, teamwork and discipline. These are valuable skills that I am still applying right now in my daily life.

3. What are your hobbies and interests?

Other than music, I love sports. I used to play Water Polo in my school days; nowadays I enjoy a game of tennis, hitting the gym, and supporting my boyhood club—Manchester United.

As mentioned earlier, I also enjoy cooking. It’s a very therapeutic process! I get a lot of satisfaction when I manage to create something from scratch. I suppose this mirrors the process of creation in my music as well, albeit a more methodical one.

There is a quote by Allen Raine that says, “You may get to the very top of the ladder, and then find it has not been leaning against the right wall.” I often think about this quote to keep me in check of my foundations and my motivations in my daily life.

5. How did you enter the media industry? What sparked you to venture into the showbiz industry?

My entry into the industry happened gradually. When I first entered university, I decided to put music aside and focus on my career prospects. However, music found its way back into my heart as I realised that I cannot ignore it and decided to acknowledge it as my passion.

My busking experience in Stockholm during my SEP gave me the confidence to come back to Singapore and continue performing. I started to find my way into the scene by making new friends and finding as many avenues to perform. Eventually, when I graduated, I took a leap of faith to pursue music full time.

Along the way, I was very lucky to meet people who gave me invaluable opportunities. For instance, I reconnected with my primary school classmate Benjamin Boo who is a gigging musician and was subsequently got acquainted with the live music scene. I met Eric Ng at a bar gig where he spoke to me about song-writing and signed me as a writer under his publishing company “Funke Monkies”. I was called up for an audition for “20 Days” by the casting director who had my contact since my involvement in Campus Superstar back in 2007. I am very thankful for these open doors; I think these are the “sparks” which helped me to slowly venture and step into the industry.

6. What instruments do you play? Which is your favourite?

I mostly play the guitar and a little piano. My favourite instrument right now is the keyboard because it opens the door to millions of possibilities, due to the advancement of MIDI technology.

7. Are there any productions or roles you’ve undertaken your favourite and why?

I was involved in a student production called 《爸，回来了》. The film was in Chinese and the story was about a family, where the man cheated on his wife and decided to return after he lost everything. I played the role of the Son. At that time, the language was a bit of a challenge and the role was also a challenging one to get into character. It was a step outside of my comfort zone, but I remember enjoying the process.

“20 Days” was also very memorable for me because it challenged me in many ways. It was my first time shooting a TV drama and there were a lot of things that I was unfamiliar with. Thankfully, the crew were extremely supportive, and I was privileged to work alongside very talented and experienced actors and actresses who were very helpful, sharing with me nuggets of wisdom on and off the set. 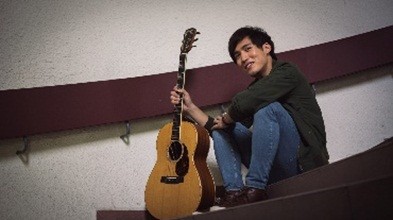 8. What is one thing you will tell your past self and future self?

I would tell my past self to not ruminate too much. I tend to think too much about things and start spiraling. As for my future self, I would say “remember where you came from”. I think this would help me remain thankful and stay grounded.

9. Where do you see yourself five to ten years down the road?

Gazing into the future, I see myself wearing multiple hats, not dissimilar to what I’m doing now, juggling between music, acting, and business. I have an interest in entrepreneurship, having recently started an event and production company with a few like-minded individuals.

10. What advice do you have for young undergraduates who are still looking for their meaning, purpose and calling in life?

Actively seek out your passion. I believe we all have something innate within us that our heart aches for. Some people discover their passion from a young age, but I think for most of us, it’s not always so obvious.

Use your time as a student to try different things, and don’t be afraid of how unorthodox they might be. Even knowing what you don’t like is one step closer to finding something you like. There’s also a lot more license to fail as people tend to be more forgiving to a “student”, so take advantage of that and be bold.

Most of all, stay positive and enjoy the adventure!