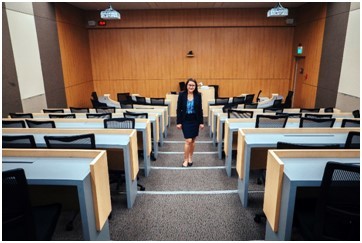 On a fine (and cold) Tuesday morning, the Digital Senior team sat down to have a conversation with the affable Kathleen Martinez-Godfroy. Kathleen is the founder of locally-established K.Godfroy Cosmetics and a self-professed fintech nerd.

(As the meeting drew near, this writer had begun to wonder if her concealer/lipstick combination, haphazardly applied, would pass muster. No pressure, just meeting a make-up company owner, none at all!)

Fortunately it did, and Digital Senior presents you the insights gained from Kathleen on being an entrepreneur in Singapore and going back to school at 33 – along with her advice for all you aspiring entrepreneur readers out there!

How it all began:

Kathleen’s start-up dreams began after the desire to awake her fullest potential bloomed within her.

“I felt at some point that I shouldn’t just work for others,” she recalls, “and so I wrote down my goals, collected my thoughts, and started raising investments. I realised that Singapore was becoming a start-up hub in South East Asia and that there was a lot of start-up contests here, so why not try?”

Her business idea started becoming reality after meeting with success during the Big Idea, an annual investors and pitching event organised by the Singapore Polytechnic Graduates’ Guild (SPGG), in 2017.

Kathleen was intimidated as she was the only one with an idea unrelated to science or technology, and also the only female competitor. Despite this, she made it all the way to the final pitch.

“After that,” Kathleen muses, “I was exposed to the Venture capitalists and others …and everything just unfolded”.

K.Godfroy Cosmetics was officially launched early 2017 with 40k seed funding, made up of her savings and funds from angel investors. Today, the brand has a store in Tangs at Vivo City – neighbouring renowned brands such as Laneige and Bobbi Brown – as well as an online store.

Kathleen is still hard at work, however. She is in the midst of raising more funding for her business, which is now doing well. Preparations are also ongoing for the launch of a second business in financial technology (aka fintech), set to launch in Q3 of 2018.

If you want to launch a start-up

Prepare to be lonely. The start-up life might seem to be full of glitz and glamour but what it involves is a lifestyle that requires plenty of sacrifices.

“If you look at my Instagram, for example, you’ll see a shot of me taking business class and heading to India/China/overseas for business trips, or pitches,” Kathleen says, “but what you don’t see is how most times, I’m going alone”.

Being an entrepreneur also means having a less active social life. Kathleen tells us jokingly that if you’re someone with a lot of game you have to limit yourself to one girlfriend/boyfriend/husband/wife and one best friend only, because having any more will simply be too time-consuming and a waste of energy. Loyalty, for her, is the way to go.

“I haven’t watched movies in months,” Kathleen shares ruefully, “when friends gush over movies such as movies such as Avengers or Superman on my Facebook timeline I can’t join in the conversation because I’m not updated”.

That being said, the start-up life isn’t as dramatically harsh as it’s portrayed, either. According to Kathleen, if you have strong pillars of support (family and friends) and are able to manage your time and emotions well, as well as find ways to raise the capital you need (angel investors, etc.), you’ll be alright.

Basically, lots of determination, self-discipline, guts, and fortitude, with a dash of love and support on the side. Sounds like a tall order, but whoever said that starting your own business was easy?

On the importance of … While managing her cosmetics brand, Kathleen also studies part-time at PSB Academy for an MBA (awarded by the University of Wollongong, Australia) – the mother of one is always busy. She makes her way to PSB’s city campus at Marina Square from her store two days a week, for classes that usually run from 7-10pm.

Always early, she has never missed a class since day one. She even goes back on Sundays to do readings, finding PSB Academy’s campus extremely conducive.

“Many think you don’t need to take an MBA to run a start-up and that it’s just a formality,” Kathleen says, “they think, why waste thousands?”

Kathleen initially was of the same opinion, believing that she could find all she needed in books.

“But I was wrong,” she reveals.

“An MBA does not just teach you or tell you what can be done. It challenges you because you have leaders for classmates – bankers, corporate managers, C-level executives – who are smarter than you. They correct you in their areas of expertise: finance, math…these are the things that you can’t just find online or learn from your friends.”

She adds: “You’re studying with like-minded individuals, gaining the opportunity to build a network and find potential business partners. Additionally, it helps sharpen your soft skills: you’re forced to be an adult by presenting more, sharing more, accepting constructive criticism more. I was being pushed out of my comfort zone”.

Additionally, the lecturers teaching her MBA at PSB Academy are entrepreneurs themselves, with over 10 years of business experience that they generously impart to students.

“They teach you not just how to be a leader, but a global leader.”

One reason Kathleen started looking into MBAs was because she wanted good mentors (“you can’t google everything online”) and it was in PSB Academy where she found one, unexpectedly, in Mr. Suresh Ponnusamy.

“Math is not my favourite subject, but I knew that I couldn’t just hire an accountant to do the financial analyses and leave it at that. I also have to be able to explain and break down the report in order to pitch convincingly to investors”.

Kathleen tells us that she had gotten cold feet and “was ready to delay and sign up the next semester”. However, Mr. Suresh went above and beyond. He invited her down to his office to have a discussion with her future professor about what the finance modules would entail. That discussion and Mr. Suresh’s actions convinced Kathleen to sign up for her MBA programme on that very same day.

Kathleen advises prospective students to find a school that will address your fears and concerns the same way PSB Academy has for her: she now enjoys math and does well in it. Without PSB and an unexpected mentor in Mr. Suresh, this might not have been possible.

We asked Kathleen if she has any advice to give any young entrepreneur wannabes (especially those in college/polytechnic/university). This is what she has to say:

We end our meeting with Kathleen ready to head over to her next one – she’s off to help model saris for her best friend (“my one friend, hahaha”). Before she leaves, she adds one last piece of advice: craft a professional image that is consistent and relatable to your target market, but most importantly, truly fits who you are.