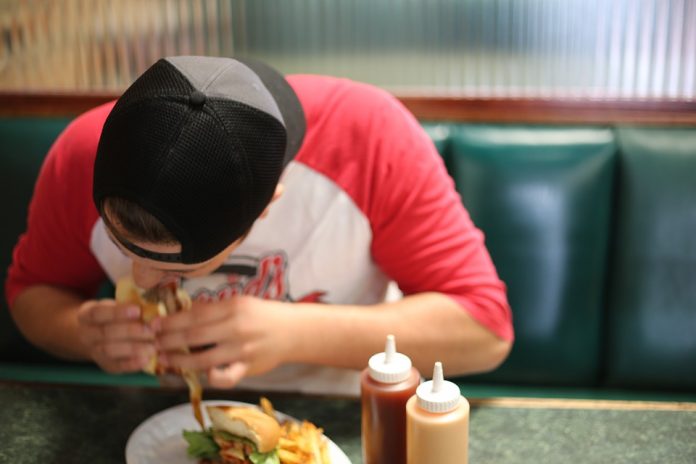 In the Singapore Institute of Management (SIM), the few branded food places that exist and are worth eating at are Subway and Starbucks. But one cannot go on eating bread and coffee every day. So, I’ve had to be more resourceful picking out food spots near my school to have lunch at with my classmates after school. Here are some places I’ve visited.

Any fan of Japanese cuisine would know the name Ichiban Sushi. Thankfully, there’s one near SIM at Clementi Mall. As you would have guessed, Ichiban Sushi sells sushi, but that’s not all. Believe it or not, many of their meals don’t involve sushi. They sell a huge variety of appetisers, from Chawanmushi (egg custard) to Shishamo Fry (crispy smelt fish). They also sell many kinds of donburi (a rice-bowl dish), udon and soba noodles (wheat and buckwheat noodles), as well as Japanese curry.

When I went there with a classmate after school, I ordered the Salmon Maru/Circle, the Lobster Salad Gunkan/War Boat, and the Soft-shell Crab Handroll. My friend ordered the Sukiyaki Beef Hot Pot. 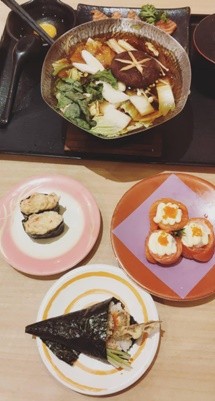 As a seafood lover, I thoroughly enjoyed all my dishes. However, I do wish the portions were a bit bigger, especially the handroll. My favourite was definitely the Salmon Maru. The fresh salmon melts in your mouth along with the mayonnaise. My friend liked her sukiyaki as well. Now, moving onto the dessert, I had the Hokkaido Milk Monaka Ice. 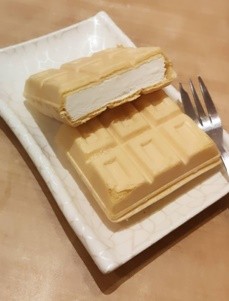 It was basically biscuits with ice-cream in them. Though simple, the dessert tasted sweet and refined. The portions were actually decent, and you can easily share this with one more person.

If you don’t know where Clementi Mall is, let Google Maps show you the way. It’s just 5 stops from opposite SIM HQ if you take bus 184. 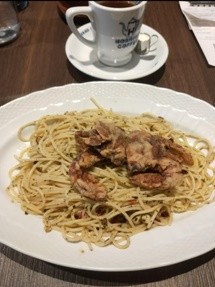 The crab was well-seasoned with salt and pepper, and there was crunch in every bite. The coffee tasted more aromatic after I added in the milk; before that it was actually quite bitter and not very flavourful.

Hoshino Coffee also serves many other kinds of pasta, from Mentaiko Carbonara to Lobster Bisque Soup Spaghetti. Not a fan of pasta? Not to worry, they have a page in their menu dedicated to rice dishes like the ‘Omu’ Soufflé Curry—a special recommendation from the restaurant itself.

My friend had bought the ‘Omu’ Rice & Angus Beef Steak Plate with Salad. We each tried a piece and agreed that the steak was amazing. The next time I go back, I’ll definitely buy the steak.

As for dessert, my friends and I bought two Pot-Baked Soufflés to share. We got one with custard sauce, and the other with vanilla. 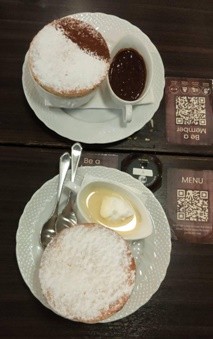 It was nice and soft, but as we dug deeper the texture felt too moist and eggy for our tastes. Though it was a decent treat, I would probably choose to get french toast or soufflé pancakes next time.

While the closest Hoshino Coffee branch to SIM is at Holland V Mall, and it’s the furthest destination compared to the rest of the establishments on this list, the distance is worth it for the food and atmosphere.

Springleaf Prata is located in The Rail Mall, a unique retail strip near Upper Bukit Timah and Hillview MRT station. Its charming exterior helps set it apart from the conventional bustling Singaporean mall filled with shoppers lugging around shopping bags.

The Rail Mall is a regular hangout spot for my classmates and I. On one of our outings, we were there to eat mala for lunch. We then passed the time at Coffee Bean and Tea Leaf until it was time for our pre-booked session at the nearby cat cafe to begin.

But on the most recent outing, we went to eat at Springleaf Prata, a family restaurant that sells great Indian Halal food. I ordered a Plaster Prata along with a Mozzarella Cheese Prata and a Chocolate Milkshake. I really enjoyed the Plaster Prata and the sugary milkshake. A plaster prata is basically just like an egg prata, but with the egg on top of the prata instead of inside it. Two of my friends ordered one portion of Murtabak to share. It was really big, as you can see below. 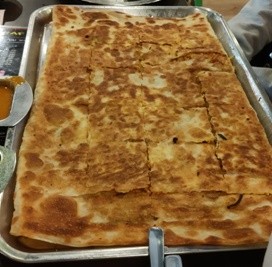 There is a huge variety of pratas, from Paper Prata to Egg Floss Prata. Dessert pratas like Milky Prata and Strawberry Prata are also available. The good news is that the waiting time isn’t long, and it’s actually quite cosy inside. There’s even a toilet at the back, though admittedly it’s not the cleanest one. I myself would like to come back and try the rest of the pratas when I have the chance!

Following Google Maps, you just have to take bus 75 from the SIM HQ and alight after 9 stops!

KAP Mall is the nearest mall from SIM and only two bus stops away. You probably pass it on your bus ride to and from school. Located on the first floor, this nautical-themed restaurant will definitely catch your eye from a mile away. It feels like a restaurant you might find by the sea on an island resort. But it may surprise you that it’s not only an all-day cafe, it’s also a fine dining restaurant and a bar.

The menu is definitely testament to the variety; they serve delicacies like the Signature Wagyu Steak and Lobster Risotto. There are also less expensive options like the classic fish & chips, known as Fish Ahoy here, and the Miso Baked Salmon. Treats you’ll likely find in cafes are also available here; it gets clearer when you look at their dessert options. They have a gelato menu with premium flavours like Matcha and Bailey’s, but they also have more conventional flavours like Strawberry and Vanilla, in case you like your ice-cream sweet and simple. That’s not to forget the assortment of cakes displayed behind the counter with a presentation that could rival a cake shop’s.

Let’s end this list with a sentimental memory of mine. This is the place where I had my first lunch with a classmate after my first in-person lesson. Sime Darby Centre is the building right outside King Albert Park MRT, and we went there because it was en-route home. I often buy the $5 Flamin’ Hot Deals whenever I visit Burger King, and that day was no exception. 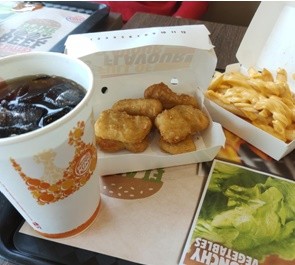 This was my lunch that I had that day, cheese fries with nuggets and coke. If you don’t want to get one of the $5 combo meals, you can always get a Whopper Burger or a Tendergirll Chicken Burger. You can also spice up your meal with sides like Hash Browns or Mexican Drumlets when you’re feeling hungrier than usual.

Burger King also has a lot of regular promotions like 1-for-1’s, so keep a lookout if you know you’ll be visiting! Take bus 74 or 154 from the SIM HQ and drop off after three stops! Google Maps is at your disposal should you get lost.

Are you an SIM student? If there’s any other awesome places that I’ve missed out, do leave a comment below and let me know! Hopefully, this list has also opened your eyes to the other food spots near the school. Bon appetit!