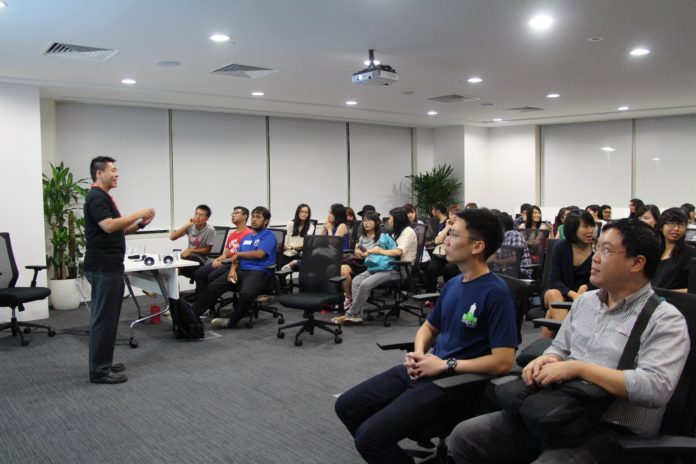 Leadership. What a big word.

Leadership has nothing to do with what title you hold. Does being the monitor of a class automatically make you a leader? Does being a CEO entitle you to be leader of the pack? In fact, most of the charismatic and influential people don’t need a title to lead. You can be a leader everywhere, at your home, in your community, or even at your workplace, without having a title in front of you.

Personal inclinations like domineering, or taking charge do not necessarily means that you are a  leader. Neither is it an adjective as there are plenty of introvert traits that contribute to great leadership. And there are plenty of people who are not charismatic that take the lead. Leadership has nothing to do with these stereotyping attributes.

Last but not least, leadership is not about being in management or a manager. So what if you have 10, 20, 50 people, or even 500 people under you? So what does it translate to? Real leadership? Probably not. But you need to, at least, be a good manager if you are taking care of so many people. As a manager, there are plenty of things to monitor, coordinate and plan with so many people involved. Hence, while managers typically manage individuals and things, leaders, on the other hand, lead people.

Why is leadership skill so important?

In some sense, leadership can be described as the art of influencing people; people’s thoughts, behaviours and attitude. According to Bill George, a Harvard Alumni and currently the Senior Fellow at Harvard Business School, he has “seen a tremendous change in leadership. You now see a very different kind of leader. Far less hierarchical.More collaborative. More empowering of workers. More global in outlook. And more in tune with public issues.” Bill, who was the former Chairman and Chief Executive Officer of Medtronic, a company listed on the New York Stock Exchange, suggests that the hierarchical leader is out, where the empowering leader is in. Leadership can be effective if people feel that they have a stake and say in the way things need to be done. It involves more than being the top guy. Leaders need to inspire people to be more efficient than ever, more effective than before and more willing to complete the task given to them. This requires a powerful and clear vision, and effective communication of this vision, whether it is a professor to the class or CEO to the employees. This is never as important as now, due to the way information in social media is passed on. Quality leadership also means the ability to deal with stressful situations, especially during times of crisis. Hence, an effective leader would seek to influence how people feel about each other, and try to align the team’s objective with individual goals and ambitions. And these are skills that are vital to the survival of any organization, especially so if they want to grow the organization to the next level. Reject reactive. Be more proactive. Successful leaders seem to know how to behave when things don’t go according to their plan or when situation turns haywire. Hence, being proactive means being prepared for situations where you can offer value to challenging problems that need to be solved as soon as possible. Hiroshi Mikitan, a Harvard Alumni and the CEO of Rakuten.com, reckon that he and his team “need to create more.” What they need, according to Hiroshi, is that to “set the trend, to be a trendsetter.” And that is simply being proactive. If one is always in a reactive state, decisions to lead people might be overcome by emotions. And as we know, thoughts and feelings don’t usually go well in tandem; so letting emotion takes charge is not good news for a leader.

Passion drives the fire in leaders. It was said that if you don’t have the burning desire for success, it would be difficult to lead your team to eventual victory. George Kaiser, a banker with a net worth of more than $7.9 billion, says that passion is what “fills one of the world’s most understated billionaires.” George, who is also a Harvard Alumni and the chairman of BOK Financial Corporation, runs the George Kaiser Family Foundation which has more than $4 billion and consistently doles out grants to organizations with a passion based investment-oriented philanthropy. Similarly, leaders in other foundations, such as the Rockefeller Foundation (David Rockefeller was in the Class of 1936) and Bill and Melinda Gates (Bill Gates, whose real name is William Henry Gates III, a Harvard dropout who later received an Honorary degree from Harvard in 2007), feel that big impacts in philanthropy starts with the organisation having a passionate leader who’s not only committed to the success of their program but the impact towards each person that they will affect and influence.

Find out and begin to live with your “why.” A clear vision of why you do a certain thing that you do makes leaders effective. The kind of commitment and focus, especially when there is clarity on the ”why” will make the things you do be consistent and inspirational to those that you lead or seek to influence. Kin Ng, a senior lecturer at Leadership and Management Institute, shared that “the greatest leaders have the drive to ensure that their vision comes to fruition, even in the face of adversity.” Teaching leadership to students who prepare for enrolment in Harvard University, Kin believes that it is important to inculcate the can-do attitude before his students start their application as their Harvard journey would be one that would give rise to the most successful and most rewarding leadership experiences inside and outside of campus. Great leaders have a clear vision from within, and that is what sparks him to continue this conversation with his students about leadership and its importance.

When I was enlisted in 2003 into the 1st commando battalion as a recruit, my platoon sergeant always tell me “when the going gets tough, the tough gets going.” Failure is not an option to me, as I ascent from a recruit to a full-fledged commando officer having graduated from the Officer Cadet School in Singapore. A great leader needs to have the self-discipline to be pro-active, driven by passion and know the reason for his or her existence. It was crystal clear to me. So what about you? Tell us more at info@lmi.edu.sg and let us celebrate your passion, attitude, and leadership together.