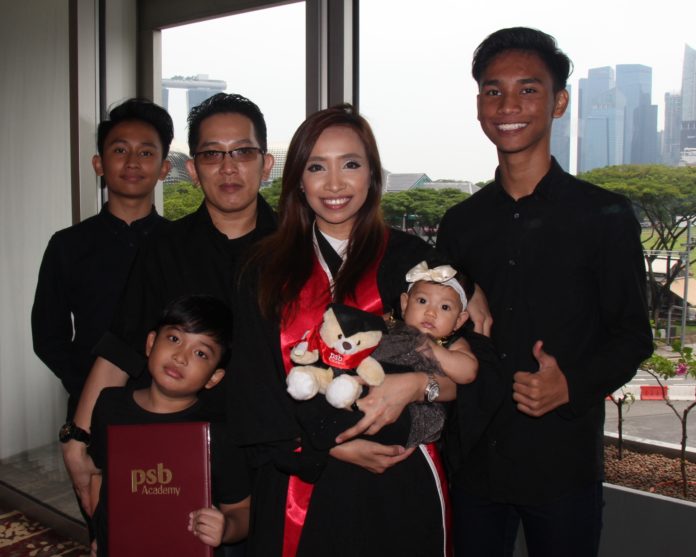 Studying is tough in itself, but life likes to throw extra challenges into the mix. We’ve all had times when it feels like everything’s stacked against us. During such moments, we tend to think that it is the end of the world. However, Regina Brett, a bestselling author said : “If we all threw our problems in a pile and saw everyone else’s, we’d grab ours back.”

To lend some perspective to our life’s problems, Digital Senior has compiled 4 stories of private education graduates. They have proved themselves not only star students but survivors – fighting against formidable odds and emerging to inspire us with their stories.

1) The supermum who studied while pregnant

How many of us have the grit to pursue higher education while holding down a job, taking care of children, and fighting through pregnancy nausea? Yet UmayaBinteRafi’ee, 31, pulled off this feat of resilience with grace and aplomb when she graduated with a Diploma in Business Administration (Human Resource Management).

The odds were stacked against her from the start — Umaya never completed her ‘O’ levels. Not only did this make jobhunting tough in Singapore’s qualifications-focused system, she also struggled to get her colleagues to take her abilities seriously. Not one to be cowed by cynics, this gutsy woman headed back to school, passing the Workplace Literacy and Numeracy test and entering a diploma course at PSB.

Already a mother of three, Umaya discovered she was pregnant with her fourth midway through her course. But even morning sickness and constant fatigue didn’t get this supermum down. Far from throwing in the towel, she tirelessly pursued her personal goal of acing her papers with distinctions, spurred on supportive friends and family. Come graduation day, Umaya was able to walk across the stage and towards a brighter future with a hard-earned diploma, a prestigious job offer from PricewaterhouseCoopers (PwC), and adorable newborn in hand.

You can read more about Umaya’s inspiring journey here.

2) The man losing his memory

Many students face extraordinary amounts of mental and emotional pressure, as Umaya’s story shows. But even in more everyday terms, students must confront the tough challenge of absorbing new material. We have to remember tons of facts and theories, and retrieve them quickly during high-stress exams. Now imagine doing that with a deteriorating memory.

At 18, Nigel Peh grappled with this student’s nightmare following a bad fall at a street soccer match. His head suffered a deep 5-cm laceration and he had to be admitted to the ICU. But even after being discharged, he was left with more than scars. He became far more forgetful and things often slipped his mind. Though he managed to graduate from polytechnic, his results were affected by these aftereffects and he couldn’t make it into a local university.

Undaunted, Nigel scouted for options that could accommodate his passion for environmental studies, settling on a Bachelor of Environmental and Occupational Health & Safety. Not only that, he further upped the game by choosing to pay for his own school fees. This way, he says, “I was motivated to put in even more effort into my studies.” Ultimately, neither damaged memory nor extra financial responsibility could stop Nigel from clinching a Prize for Academic Excellence and a Faculty of Health and Medicine Medal.

You can read more about Nigel’s inspiring journey here.

3) The idler with potential

While some who succeed show superhuman powers for self-discipline, like Nigel, others are late bloomers regarding self-motivation. It’s only with maturity that the drive to work hard kicks in, allowing unexpected talents to shine through.

This was certainly the case for Kenneth Tay, whose youthful idleness almost cost him his future. All through secondary school, Kenneth admits, “I simply chose to idle my time away… I remember being a constant worry to my parents, as I was nonchalant about my studies and barely made it through each year.”

At 16, he did badly for his ‘N’ levels and ITE was his only option. Furthermore, he adds, he was heavily obese, weighing close to 110kg.

His wake-up call came by chance, when a friend made a stinging remark that he would never be able to lose weight given his unhealthy diet. This spurred Kenneth to do what even his friends thought impossible and get his life back on track. Not only did he shed 30kg after much hard work, he took up a Foundation Diploma at PSB that enabled him to progress toward a Bachelor of Engineering (Mechanical).

You can read more about Kenneth’s inspiring journey here.

4) The entrepreneur who refused to fail

As Kenneth’s story shows, success is all about being spurred on to prove the naysayers wrong. When you’re trying to dream big, there’ll always be discouraging voices in the background.

This is even more so when you’re taking entrepreneurial risks. They say 90% of startups fail. And the chances of a rookie without business know-how succeeding? Probably even slimmer. Faced with these odds, aspiring entrepreneur Shahnaz Nazimuddeen refused to back down.

The plucky 25-year-old dreamt of launching her own online home décor business Lovlihaus, and struggled to navigate her way through fund raising and dealing with suppliers. After some time, she realised that she might never get anywhere without a strong business foundation.

In a characteristically pragmatic move, she bit the bullet and took up a Master of Business Administration. Now armed with knowledge in business strategy, her one-woman show has brilliantly bootstrapped its way to an international presence, currently operating in Singapore, Malaysia and Brunei.

You can read more about Shahnaz’s inspiring journey here.

At the end of the day, everyone struggles with something, whether it is a physical condition, an external situation or just lack of motivation.  Life is never a bed of roses. However, it need not be a dark valley either.  It is our responses towards those obstacles that determines our lot in life.

If there’s anything these graduates shows us, it’s that it doesn’t matter what kind of challenges you’re up against. The longest odds can be overcome with grit and optimism – though it may not seem like it when we’re just starting out.

Now get out there and chase your dreams!