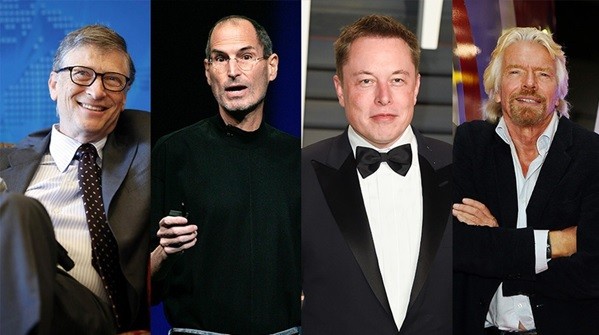 Having been a speaker and trainer for about 2 years now, I had the opportunity to make friends with some of the most successful people in Singapore, from top CEOs, best-selling authors to multi-millionaires.

These are the same people who were once in your position now. Mugging every day and wondering how your life would be like after graduating. Whether you will make it big one day.

I decided to find out what they did differently in university that made them so successful today. And surprisingly, grades isn’t part of the equation.

Yes. You heard me.

GRADES HAS NOTHING TO DO WITH IT.

Before you start throwing away your books. What I’m saying here is that if even if you do not have good grades, it does not matter as much as you or others think it does.

Because at the end of the day, if you display the traits that these elite performers had when they were in university, you have a high chance of making it big.

1. You don’t give a care about what others think of you Seen those resume and personal branding workshops in your mailbox? There’s just so much hype about “standing out from the crowd” isn’t it?

But how many of us actually have the real guts to really make ourselves stand out? Like REALLY stand out!

The truth is, most people prefer to play small and safe in life just to fit in than to stand out.

It’s so easy to change ourselves just to become part of the crowd, become the teacher’s pet or to impress our parents.

Most people are so self-conscious of what others think of them that they are in a never-ending race trying to change themselves just so that they can be liked (even if it means forgoing their happiness).

These people are the ones who change the way they talk and dress even if it feels so uncomfortable to them.

These are the people who study like mad every hour of every day on a course that they hate just to have their parents say “I’m proud of you!”

Have you ever seen an everybody-pleaser who is also a massively successful person? If you do, please connect me with him or her because that is just a never-seen-before miracle.

Steve Jobs, Michael Phelps, Donald Trump, Ellen Degeneres and Oprah Winfrey are independent thinkers who created a massive vision for themselves, a vision so out-of-the-world that it has never been seen ever in the history of mankind.

They are the rare breed who will keep on hustling day and night and deliver world-class results despite having tons of haters rooting for them to fall badly.

What if the whole world thinks that they are crazy? Well, they don’t care.

If you want to be really successful, you would have to learn to stand your ground even if it feels lonely and that the pain of isolation become so overwhelming because you are the only person left who believes in your dreams. Admit it. If you are in your current course for one of the above reasons, then you are here because you HAD to study not because you WANTED to.

If money is no object, would you still be in your course now?

If the answer is NO, then you might want to reevaluate your life choice because life is just too short to wake up every morning doing something because you HAVE to!

Because to me, that is torture.

There was once a classmate of mine who asked me, “Why did you choose to study finance?”

I said, “Just for fun!” She probably thought that I went nuts. And she probably still does now.

But the truth is, I went through years of depression because I did not like what I was studying back then. I went from engineering in polytechnic to architecture in NUS and finally to Banking & Finance in Nanyang Business School.

If you wake up every morning doing something that you do not love, you are not living. You are merely surviving and getting by.

Life if too short to do something that you do not love.

Most importantly, if you aren’t doing something that you love, there is not a chance you are going to be able to compete with those who absolutely love what they are doing. Because to them, it feels like PLAY and not like work.

And if they can outwork (or outplay) you doing what they love, you bet that they can also outperform you. 3. You will never ever let your GPA define your worth

I met a senior 2 years ago whom graduated with a 1st class honors from Nanyang Business School. He quitted his 9-5 corporate job just a few years into his high-paying career. Guess where he is now?

He is now one of Singapore’s most well-known investor and an international public speaker. So successful that he shared the stage with Richard Branson, Brian Tracy and Robert Kiyosaki.

I asked him this, “What did you do in university that made you so successful today?”

His reply was surprising, “Just love what you do and don’t let your grades define you”.

Doesn’t sound like the conventional advice does it? I know you are told to study hard and get a good job but the truth is, that advice just doesn’t work in this century anymore.
Nowadays, “C-” students are the ones who run companies and hiring “A+” students to work for them.

In fact, some of my most successful entrepreneurs and traders of Singapore I know only had an “O” level certificate and they are now earning in one month what degree holders earn in 1 year.
There’s another friend of mine. He did not graduate with honors from NUS like his peers did. Guess where he is now?

He is travelling around the world teaching PHDs, masters and degree holders how to trade for a living.

It is not unfair. It is the truth. It is the world that we are living in now.
And I can give you many more of such examples.

You know it. More than half of what is inside that textbook of yours cannot be applied into the real world. Even if it works out for you, it will be outdated by the time you’ve graduated.

The real knowledge comes from practical street-smarts. Getting an “A” only shows others that you have a good ability to memorize your textbook and have good exam-taking skills. That’s it.

If being a doctor, lawyer or specialized professional is your dream job, then by all means work hard on your studies because society needs you.

But if making it big as a CEO, investor or buying your dream house is what you really want, never ever feel that you should decrease your worth just because you aren’t in the honors list. That is too much of an exaggeration!

Because in the real world, the bottom-line isn’t straight As’. Your customers, clients and bankers won’t come into office one day and ask you for your GPA. And you’ll wonder why you were even so concerned about your GPA to begin with.

Your worth isn’t going to be determined by your GPA or your level of income.

Only you have the power to determine your worth and only you can define it. Period.